ToxFinder© is a custom-designed automated fluorescence-based high-content life-cell imaging system with integrated liquid-handling robotics. This system is the latest of overall four comparable devices, installed in the lab of Prof. Stephan Frings, Department Molecular Physiology, Centre for Organismal Studies, University of Heidelberg and in the lab of Prof. Joe Lynch, Department of Molecular Neuroscience at QBI, University of Queensland, Brisbane, Australia. The robot is made-up of an inverted fluorescence microscope with attached CCD camera and fully automated auto-focusing infrastructure. It is equipped with a motorized stage for precise positioning of multititer plates and a pipetting device for automated liquid-handling. Hardware controlling, data acquisition and quantitative image analysis is accomplished by software modules written by Dr. D. Gilbert in LabView (National Instruments) running on a laptop computer. ToxFinder© is a valuable tool in development, optimization and miniaturization of cell-based assays. The spectrum of applications is versatile: ToxFinder© has been used for screening of fractioned animal toxins on cyclic nucleotide-gated (CNG) channels, for time-course calcium imaging to assay TRPV1 activation as well as for structure-function analysis and pharmacology of glycine and gamma-aminobutyric acid receptors (GlyR, GABAAR) and other membrane proteins. The robot is currently being used for development of novel cell-based high-content screening assays using a variety of cell lines, fluorescence indicators, natural and synthetic small-molecule libraries as well as random-mutant overexpression collections. 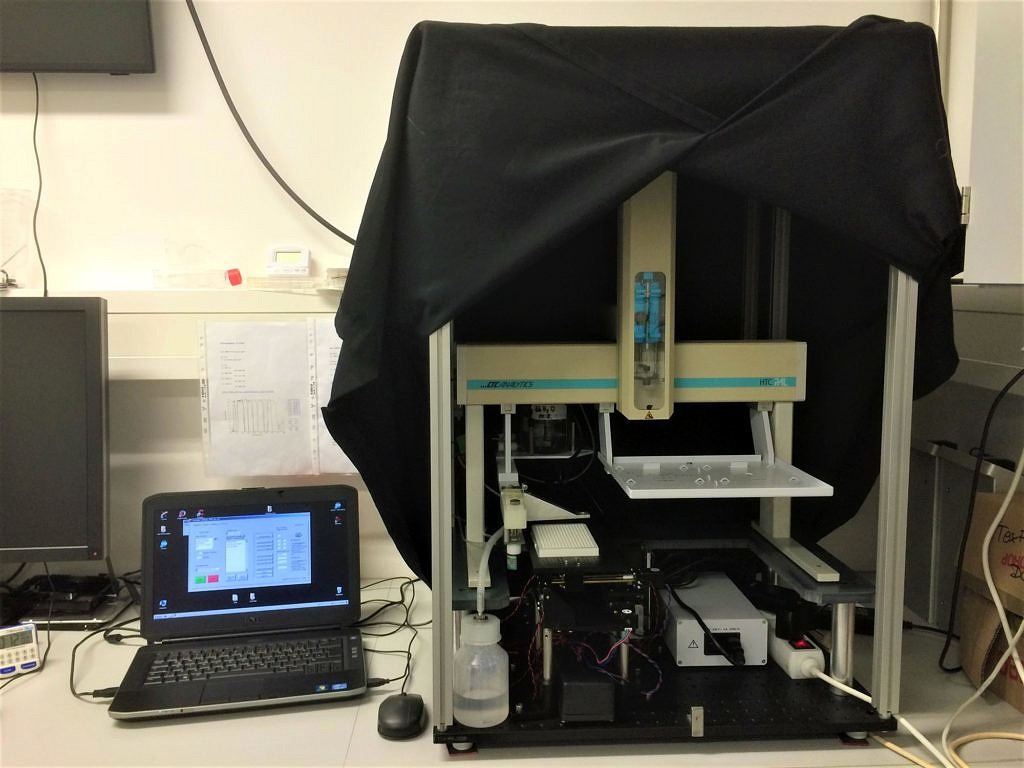 xCell is a rapid prototype of a portable life-cell imaging system for time-resolved visualization of slow dynamic processes in living cells, which reduces the cost of acquisition to about one hundredth of the cost for conventional microscopes and can be readily available for other laboratories and also educational purposes. The device is made-up of a microscope mounted on an automated stage and an incubator for maintaining optimal culture conditions. The system was constructed using a 3D-printer and off-the-shelf components, including a webcam-based  microscope, temperature, gas and humidity sensors for environment control and open-source Arduino microcontroller boards for hardware control and data acquisition. A software interface was developed using LabVIEW and LabView interface for Arduino.

DetecTIFF© is an image analysis software, which allows fully automated object recognition and quantification from digital images. The core module of the LabView©-based routine is an algorithm for structure recognition that employs intensity thresholding and size-dependent particle filtering from microscopic images in an iterative manner. The software has been developed and employed by D. Gilbert for a large variety of scientific projects.